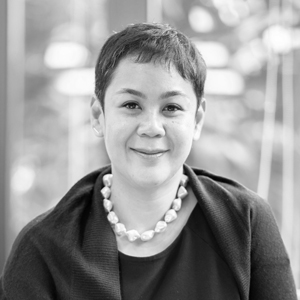 Zinnia studied graphic design at Art Institute of Seattle (1995) and School of Visual Arts New York (1998) and started her career in magazines, continues now to be one of the few designers that is sought out for editorial design in Indonesia. In 2015, together with Adityayoga, self-published a book called "Graphic Design, Deadline, Pray". The book was a huge hit, got noticed by Gramedia, and now, a 5 series of the pray books published in early 2017. In 2010, she built a design studio, Ampersand which focuses on editorial and retail design up to this day.

In 2009, she joined the Indonesia Graphic Designer Association and her love for their cause led her to became their president (2014-2017) and within her term, she helped establish the Indonesia Agency for Creative Economy which has now become a ministry. She was also active in the Indonesia Committee for Economic Industry Creative Economy sector Workgroup as head for Design Sector.

Currently, she runs Ampersand Studio while actively involve in the design community as vice president for ico-D (International Council of Design), a world body, non-profit, non-partisan, member-based network of independent organisations and stakeholders working within the multidisciplinary scope of design professional designer.